Nanomites was our first game, and we felt we learned a lot from its development. Not only was it the first game we developed at 3D Avenue, but for most of us, it was the first full game we were developing at all. As a programmer, my only game development experience had been following a tutorial to make a Baloon Popper game for iPhone, and some failed attempts to make Half Life and Quake mods back when all the cool kids were doing it, and I say failed because I never actually dedicated enough time to do it. Our artist had been the one with the most experience working on bigger gaming projects, having worked on a couple of popular Half Life mods (Sabaneta 2050 and Front Line Force). His work on those mods however, was doing 3D stuff, Nanomites was a 2D project, so this was new ground for him as well. For our game designer, it was the first time he’d make calls on the direction of a game, the gameplay, the mechanics, adapt to the technical restrictions, to the knowledge of the team, and adapt to hardware liminations, many things from an early Nanomites design document didn’t make it into the game, because of time constrains and team expertise limitations, and this was something that the game designer had to adapt to and learn.

When I talk aboout hardware limitations, I have to mention, that even though the power mobile devices have nowadays is incredible, it’s still not where we would have wanted it to be for Nanomites, specially for older devices like the iPhone 4 and previous generation iDevices, but this was something we did fully realize at the moment, in fact the reason we wanted Nanomites to be 2D was because we thought that it would be easier to make a 2D game, but after having to deal with textures, memory liminations for big texture files, atlases, sprites, frame by frame animations, now we know it’s not neccesarily easier to do 2D instead of 3D. There were many things we didn’t know.

The original Nanomites idea didn’t include the characters, and it was much simpler, it was just called Nanosplit, but when we commited full time to it, instead of working on it “after hours” i.e. after our day jobs, we thought we could add more stuff, and so the design document grew. The small balls, became shapes, the shapes became characters inspired by the Worms series, and the name was changed to Nanomites. Then, someone suggested that the name sounded like small robots, and we thought it was cool and accurate, and so we started working on robotic concepts.

The plan was that our first game would be simple, a game we could develop quickly, one that wouldn’t take too long to finish, the idea behind Nanomites was “a game where you’d draw lines to separate bouncing balls”, it SOUNDS simple, but for about three months of development, all we had was a nice looking screensaver with almost no gameplay at all other than the “bouncing balls” part. During that time the team became very frustrated, one of our programmers left because of this, and it wasn’t moving forward as fast as we’d have liked, but luckily as awesome as the the Unity 3D community is, we were able to find help on the forums, and the first mite was finally captured, with the right rules, three months after development began. Hadn’t it been for the incredible input from the forums, Nanomites wouldn’t have happened. And we are beyond grateful for their help.

About four more months were all about polishing the game, adding more mites and behaviors, the line drawing mechanics (which at some point will have its own article, because it’s something I’ve been asked about by other programmers, and I have to say it was very challenging), the sounds, the interface, squashing bugs, the tutorial, the music… So many things go into making a game, and it’s not until you make it, that you realize the amount of work it requires. Loving what we were doing helped a lot. I guess the initial frustration was because we loved it so much, we were adapting, learning, and it’s probably like the start of a long term relationship, you are going to fight, you are going to disagree, but eventually, hopefully you can make it work, and get stuff done.

We actually made the game. To be honest, after the first couple of months of development, we thought we weren’t going to make it work, it wasn’t playable and we had no clue how to do it all, but we persisted, we made it work, and we are extremely proud of how it turned out.

We learned a lot from the Nanomites’ development, how to plan better, we have a better idea of what smaller and simpler means in terms of projects, lots do’s and don’ts on the technical side, how to actually make games (which was very exciting), we learned a lot about ourselves and about each other, and even though we still have a lot to learn, we feel way more confident, we have a better idea of what to do, and what it will take to get it done.

We feel the main issue with Nanomites was that the development of the game mechanics were too difficult and challenging for the experience and knowledge we had, it was definitely not for beginners. During development the project also got too ambicious and ultimately we had to cut many features from it because originally (when it wasn’t as ambicious) we had planned for a 6 month developement cycle, and we were getting close to 12 when the game came out, some of those features include adventure mode with a pretty cool story, many more mite behaviors, and boss fights. We thought the idea sounded simple and that we’d have time to do it all, but that was a huge mistake. 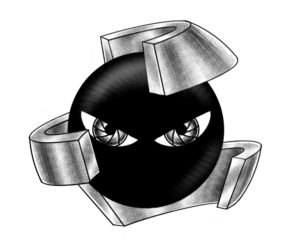 MegaMite. One of the scrapped boss ideas.

If you are just starting, try as much as you can to know what you are getting into on the technical side, that was the main thing that dragged us back, but gladly, in the end, we made it work. To do that, just do research on the mechanics you want to implement, on all of them, before writing a single line of code, that should help a lot.

We also made some mistakes regarding marketing and publishing, which translated in Nanomites not doing as well as we wanted, but we are working on fixing those for our next title.

What else went right?

Nanomites received many positive reviews, and people really enjoyed the game, the top scores on the leader boards aren’t even ours, and that makes us very happy. Everyone that played it, enjoyed it a lot, and the game has solid ratings on both the AppStore and Play Store.

What is ahead for Nanomites?

We love Nanomites, the characters, the game, and we love that people enjoyed the game so much. We will do an update on the game to support some resolutions on some devices that have come out since the game was released.

One of the most requested features is to continue playing from the wave you are on when killed, and we are thinking of ways to allowing it, so that should come at some point. Right now we are focused on Spectrum, so it might be a little bit before we do more stuff with Nanomites, but we are not going to forget about it. We already upgraded the project to use the latest version of Unity 3D, and cleared some bugs that spawned because of that, so an update is on the works, but as I mentioned, our main focus is Spectrum right now.